What will you be for Halloween this year? May I suggest a few?

You and a friend can be racists. Are we really trying to save the “princess” or are we just after King Koopa cuz he’s Japanese? 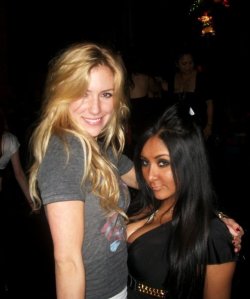 You can be unbelievably shorter, oranger and drunker than anyone has ever been before (right).

You can be a reality tv “actress” who tries for the I don’t really care look. When in reality, it takes: 7 stylists, 2 make up artists, 9 gay guy friends/hairdressers, 12 Sugar-Free Red Bulls, Zero calories, One $700 distressed looking/vintage t-shirts of a band you’ve never heard of and two Hermes totes full of blow to look this apathetic (left).

You can be a creepy True Blood/Twilight/New Moon wannabe Vampire chick. Finally all of those hours spent practicing your new signature, Mrs. Bill Compton, perfecting your plastic fangs and letting your vampire boyfriend feast upon your neck during his lunch breaks at Circle K will pay off! All you need is a warped sense of reality and little to no life ambition.

You can be a super trendy teen mom who likes to wear Blair Waldorfesque ties and school girl uniforms and is considering selling your soon-to-be birthed baby at a really classy yard sale. A yard sale your baby would be proud of – with tables and maybe a streamer or two. Unlike those tacky yard sales where they just throw the sh*t on the front lawn and yell out to passing cars, “Pay me!”

You can be a girl who describes passing her GED test as, “impossible” and enjoys beating on big guys who fill her belly full of babies. Must also use copious amounts of foul language in front of infants/toddlers, enjoy dancing worse than e-popping, glow-stick waving, furry pants wearing 1995 ravers and be unable to fully open your eyes (literally)…ever.

You could be the greatest dad ever!

If the criteria for becoming the greatest dad ever was:

New comedy video every Tuesday! 🎤 Here’s a clip from last week’s @leftbreastcomedy show @lanterncomedy_ 💜 💪🏻
This Thursday at the @comedycentralstage ! 💜🎤 #aquarius
I miss this super mom and her squad already! 💜 👶🏼
I live here now. 🇺🇸
When I tell you this was therapy, I mean it! And only a $3 copay! Bubbles are life! 🌈 Catch me tonight telling jokes at the Town Tavern in DC.
Favorite moment of the trip was definitely hanging with our Phoenix comedy fam in NYC. 🌵🎤 Started in the desert now we here!