The next generation of Beverly Hills 90210 premiered last night and since I was a die-hard fan of the original 90210 series (which aired from 1990-2000), I had to watch. Yes, I was one of those girls who was in love with both Brandon and Dylan and proved my devotion to them by sleeping each night with two heart-shaped pillows that displayed their faces. I also collected many 90210 buttons and safely kept them in my Caboodle when they were not proudly fastened to my favorite Planet Hollywood jean jacket. Bascially, 90210 changed me. It ruled the 90’s and jump-started my love affair with California.

As a young girl from Minnesota, watching Brenda and Brandon Walsh transition from their Minnesota upbringing to their new California life spoke to me in a religious way. I longed for my parents to relocate from St. Paul to Beverly Hills so that I could plunge into the good-life and live my inner-Brenda. I thought for sure that my life was destined for palm trees, money, mansions and Kelly Taylors. Sadly, the biggest move my family made while I was growing up was when we moved from St. Paul, MN to Lake Elmo, MN, which was really only a difference of 15 miles or so. However despite our geographic and age differences (most characters started off the show in the 10th grade, while I was only in the 5th grade), I was hooked on those kids from West Beverly High. 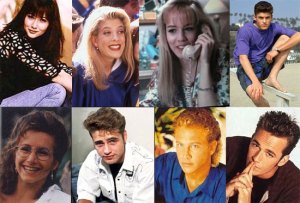 Last night’s series premiere of the new 90210 was bitter sweet for me. I was beyond excited to see both Brenda and Kelly on screen again; however, it also reminded me of how old I really am and how long ago the 90’s really were. Overall, I liked the show and plan on continuing to watch, but it still failed to create the same magic that the original cast had.

Below, I’ve indicated my TOP 7 complaints/disappointments regarding the new 90210 vs. the old:

1. The new girls of West Beverly may be the skinniest 15 and 16 year olds in the history of teenage girls. The female actress who plays the “Brenda” character could not have weighed more than 70 pounds and that’s being generous. She was a good actress, but I often couldn’t pay attention to what she was saying. Instead, I just wanted to feed her copious amounts of Chipotle burritos.  However, the actress playing Kelly Taylor’s younger sister Erin, was a little “heavier,” weighing in at approximately 80 pounds. Overall, it seemed as though each actress in the new 90210 (even the one playing the mom) appeared to be lacking in nutrients. Why is it now necessary for television actresses to be so thin? Kelly and Brenda were by no means fat, but they did have a little meat on their bones.

2. There weren’t nearly enough scenes with Brenda and Kelly in them, but maybe they are coming in future episodes.  I also wish that they would bring back Donna Martin, David Silver, Dylan McKay, Brandon Walsh and what the hell, even Steve Sanders. No offense to Aundrea Zuckerman, but I’m okay with her exclusion from the show. Basically, I’d like to see more original cast members and less of the super skinny “new kids.”

3. I was hoping the show would include a “political” issue such as a school protest. Hopefully in future episodes, one of the new kids will get totally drunk at prom, which will then threaten his or her graduation status…DONNA MARTIN GRADUATES!

4. None of the new male cast members sported a tightly curled Steve Sander’s mullet. They also didn’t rock fitted t-shirts that were then tucked snuggly into tight-fitting, light-washed denim jeans. Correct me if I’m wrong, but that is the West Beverly look, right?

5. None of the new actresses were the daughter of the executive producer. Can you say Tori Spelling!?! And none of the actresses (playing high school students) resembled a 40 year old woman. Can you say Gabriel Cateris!?!

6. The new “Walsh-type” parents were much too hot. The beauty of the original Walsh parents, Cindy and Jim, was that they resembled actual parents. Cindy wasn’t trying to steal Brenda’s thunder by stealing and then wearing Brenda’s favorite black body suit and Jim wore ugly sweaters and was going bald. Because that’s what real dad’s from the Midwest do…they wear ugly sweaters and go bald. Basically, the original parents were simply more believable.

7. None of the new West Beverly kids gave off that Dylan McKay coolness. Despite the fact that one of the male characters surfed, he still lacked the aloof charm that Dylan possessed so effortlessly. And he also didn’t live all by himself in a multi-million dollar Beverly Hills pad and head off to Baja every weekend. Dylan was so badass!