This is the only time I’ll ever admit to this, but Nancy was right. Nancy Reagan that is.

(Just Say No to crack and Reaganomics)

Drugs like meth, crack and heroin are thankfully still a mystery to me. I’ll never forget my first time through the D.A.R.E (Drug Abuse Resistance Education) program when Officer Kavaloski gave me the information that kept me off the pipe, powders, pills and needles. He successfully told me two of those stories that after you hear them, they never seem to leave your memory. Officer Kavaloski stood tall and serious as he said to my D.A.R.E class – Drugs make you crazy. I was called to a house of a woman who was high on PCP and you know what she did? (He paused for emphasis) She ate off the tips of each one of her ten fingers. Despite the fact, that my mind was far from fully developed, that still did not sound appealing.  But he didn’t stop there…And I once answered a call where a man high on LSD jumped from a 50-story building because he thought he could fly. Well, he couldn’t, but he could liquify. It was at that moment that Officer Kavaloski ruined any potential I had for a “good buzz” in my teen years.

With all the pictures that we seem to be constantly inundated with showcasing those “attractive” individuals who do find a taste for drugs like meth, crack and heroin, why would anyone want to try it? You mean I can go from having a home to being homeless and forced to sell my scarred-up body to douche bags in order to feed an addiction to a drug that will destroy my dreams and make my parents cry? Sign me up!

It especially pains me to see true talent go to waste because of an addiction to drugs. This is how I feel about my homegirl Amy Winehouse. She is truly talented! She’s not like those other female “singers” out there who think just because they can afford to make an album, they should. Amy is an actual innovative and remarkable talent. After I first heard her Back to Black album, I was hooked. Every song on that album is worth my money, my time and my admiration. She was able to mix 60’s soul and blues and make it fresh for today’s audience. She seemed to me to be the pale version of Otis Redding and Diana Ross’s love child. Somehow she was able to channel Marvin Gaye, Smokey Robinson and Etta James in her breathy tunes and emotional lyrics. I then discovered her debut album Frank  and became confident that she was going to change the current state of popular music for the better. However, now her talent seems to take a backseat to her love of crack and booze. I realize that many artists and creative people are messed up, but this is ridiculous. She’s been photographed smoking crack, bruised, bloody, and stoned out of her mind. She is now only a skeleton of what she once was and in desperate need of nutrition that isn’t in the form of crack, Mountain Dew, Marlboro Reds or cheese curls.  And all I want to know is what happened? 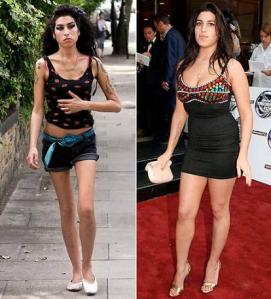 Amy was once not only talented, but attractive. Isn’t there someone who can step in and take power of attorney over her? It’s obvious she’s out of her mind on crack. I recently read a Rolling Stone interview with Amy Winehouse and it broke my heart. She couldn’t even make a coherent statement and spent a ridiculous amount of time professing her love for her incarcerated husband and fellow crackhead, Blake. She now seems to be surrounded by only paparazzi and enablers who come in and out of her London crack-den at all hours of the day.

Amy’s looks aren’t even the most alarming change that has come from her drug addiction. Her health seems to be deteriorating at a rapid pace. It seems that once a week, Amy is in the hospital for some bogus reason that does little to mask the fact that she’ sick because SHE’S A CRACKHEAD! She is even in the early stages of emphysema. She’s only 24 years old!

Where are Amy’s real friends? And where is the show Intervention when you need it? I think A&E should now step in and work with anyone who cares about this girl, grab her by her beehive and drag her to rehab. It’s overdue! Sure she proclaims “no, no, no” in her Rehab diddy, but that’s so 2007. It’s now 2008 and Amy needs rehab even more than Sienna Miller needs a lesson in morality and Michelle Duggar needs to give her vagina a rest!

(My baby door is sore)

So someone PLEASE SAVE AMY before we lose her! She’s only got a little over 2 years before she could join the FOREVER 27  club!

I have a very unique comedy-style. If people at comedy shows look like they’re not having fun, I sit on their lap. 😜 Thank you @thesamanthahale for the stage time!! I love your shows!! 💜 What a fun time and GREAT AUDIENCE! 😘
Ahhhh the “good” ol’ days. 😈
Tomorrow!! And my bestie from AZ will be there!!! 🎤💜 #standupcomedy
5 years ago today, I ran away to Vegas with this hunk and got married. 💒 To celebrate, he made us breakfast and we took 2 naps. Life is good.♥️
It’s the YouTube collab I’ve been waiting for!!! ⭕️ Join me & @nerdtainmentonig talking all things @thecirclenetflix episodes 7 & 8 today at 1:45 pm PT. *link in bio* These episodes were soooo good. #thecirclenetflix ⭕️.
#tbt Me and Xchel in 2010. We really haven’t changed much. 😂#circlebackchallenge