I used to feel sorry for Brooke Hogan. Her family is falling apart before America’s very eyes and somebody is continually lying to her, telling her that cutting off the top half of her jeans looks good. 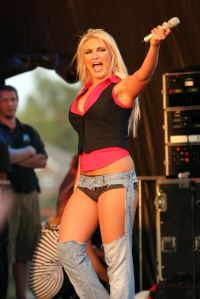 (I learned it from my mommy)

However, I am starting to lose my empathy for Brooke. Perez Hilton has reported that Brooke made the following statement:

“You know what? I am actually not that much into voting. I think it’s kinda crazy that a woman is running, because I think that women deal with a lot of emotions and menopause and PMS and stuff. Like, I’m so moody all the time, I know I couldn’t be able to run a country, ‘cause I’d be crying one day and yelling at people the next day, ya know?”

Is this girl serious? First she tries and fails to be a pop superstar and now she’s commenting on the state of American politics!?! And her opinion counts why? She doesn’t even vote!

Why is the Hogan family so screwed up? I grew up loving Hulk Hogan. My brother and I were die-hard Hulkamaniacs, but now that I’m older I realize that Hulk should have probably spent more time at home raising his little delinquents than “fighting” with Andre the Giant. Because it definitely seems as though Brooke’s cradle-robbing mother (She’s is currently dating one of Brooke’s high school classmates) failed terribly in the parenting department. The saddest part is that Brooke markets toward young girls. And there are young girls out there who look up to Brooke for the mere fact that she’s blonde, rich and on television.  And this is the message she has for them!?! I know I am contributing to her relevance and adding to the commentary about her, but someone seriously needs to either take away her speaking privileges or sit her down and make her read a book or two. And no, anything by Candace Bushnell doesn’t count.

Why do we have so many women on television and in the media who are as dumb and worthless as they look? It’s just unfair to place the weight of representing women as successful, smart, and capable on Tina Fey’s shoulders.

2 thoughts on “Sexist against your own sex…smart!”

Tomorrow!! And my bestie from AZ will be there!!! 🎤💜 #standupcomedy
5 years ago today, I ran away to Vegas with this hunk and got married. 💒 To celebrate, he made us breakfast and we took 2 naps. Life is good.♥️
It’s the YouTube collab I’ve been waiting for!!! ⭕️ Join me & @nerdtainmentonig talking all things @thecirclenetflix episodes 7 & 8 today at 1:45 pm PT. *link in bio* These episodes were soooo good. #thecirclenetflix ⭕️.
#tbt Me and Xchel in 2010. We really haven’t changed much. 😂#circlebackchallenge
The Lunzer’s lost our sweet little Wally Wee from the BBC this morning. He showed up on my parent’s front porch 20 years ago and never left. He was my mom’s constant companion and a friend to all who visited. His favorite thing in the world was curling up next to the fireplace and that’s exactly where he passed. Therefore, I can truly say he died doing what he loved. ♥️ Thank you for all the years of love you gave our family. Pets really are superior to people in so many ways and Wally (named after my late grandpa) was no exception. Hope cat heaven is full of cozy fireplaces. 😢
Merry Christmas from the Hernandez family. 🎄❤️ Aka two dorks who dress alike and own a ring light.